Bonsai Begins With a Seed


The Maple seed are sprouting! 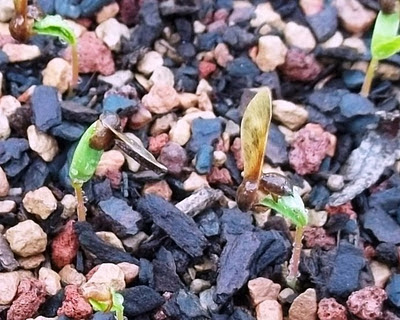 The cotyledons are the embryonic "first leaves" of a seedling

There is no such thing as "bonsai seed". The packs of seed marked as such, are just ordinary tree seeds that can be grown into a bonsai. They are a good source of tree seeds when none are locally available.


Tsukamiyose A natural forest planting can be created by scattering several to several dozen seeds in a tray. The seedlings are planted very close to each other and develop into multiple trunks with each tree naturally competing for its own light and space.

Getting tree seeds to sprout:


Most tropical trees will germinate as soon as they ripen, but seeds from most temperate trees need to be sown after stratification. Stratification is a period of artificial winter that trees that are not tropical need to set off the internal clock that spring triggers and makes seed sprout as temperatures rise. Depending on the seed species, they will need 21 to 90 days of cold storage to begin to sprout. This can be done in the home refrigerator.  Use zip-lock sandwich bags with damp peat moss. A fungicide can be used in the media to keep soil borne diseases from killing the seedlings. If any of the seed germinate in the refrigerator, plant them.

When the artificial winter is over, the seeds are ready to be planted.  It is suggested that they be soaked overnight in room temperature water to improve germination percentages. Seeds that float after soaking won't germinate so toss them out.

Chamomile tea - 2 tsp of chamomile flowers to 1 cup of boiling water allow to steep overnight or at least until cooled. Strain and then use as is to moisten growing medium before planting seeds then use in a mister to spray soil. Sage or garlic teas also have been used. Soak the seeds in a solution of hydrogen peroxide and water (1 teaspoon to 1/2 cup of water) to remove any lingering bacteria on the seeds. Some lightly sprinkle a bit of cinnamon or baking soda over planting mix used as a fungicide on plants for mildew.Two capfuls of household bleach in the water used to dampen your peat moss or vermiculite could act as a fungicide.


Plant tree seed in the Fall and let Mother Nature take care of your stratification. Just remember to protect them from rodents (squirrels and mice) and label that “empty pot of soil”. Once I was talking with a fellow enthusiast in the nursery and he started raking his fingers through a tray filled with soil and began talking about soil mixes. I should have labeled that flat as I had seeded the tray with  Jacaranda for a Tsukamiyose the day before!