A Japanese Zelkova (Zelkova serrata) bonsai on display
at the National Bonsai & Penjing Museum at the United States National Arboretum.
According to the tree's display placard, it has been in training since 1895.
It was donated by Yoshibumi Itoigawa.

Zelkova serrata (Japanese grey-bark elm) are related and quite similar to Ulmus parvifolia (Chinese elm). The zelkova is deciduous; the Chinese elm is semi-tropical. Zelkovas are often misidentified to get around import restrictions. They can be distinguished by their unwinged fruits and their leaves which are symmetrical rather than uneven at their bases. Along the shaded path to Haeinsa Temple,
one passes the stump of a zelkova tree
planted in the ninth century.
Haeinsa Temple “Reflection on a calm sea"
Janggyeong Panjeon In the third year of King Ae-jang, the 40th king of the
Shilla Dynasty (802AD) when Queen Ae-jang’s
incurable illness was completely cured by the prayers of both monks, Sun-eung and Li-jong,
King Ae-jang contributed lots of temples, sermon halls, and hermitages
and thereby established Haeinsa in return for the favour.
And in commemoration of this, the Gosamok is said to have been planted.
The zelkova tree has grown along with Haeinsa over a period of some 1,200 years
to wither and die in 1945, and now only the base of the trunk remains,
showing the long history of Haeinsa. Haeinsa (해인사) temple is one of the most beautiful in Korea, due to its location deep in Gayasan National Park. The temple is famous for housing the Tripitaka Koreana – 80,000 wooden printing blocks carved during the Goryo Dynasty (AD 918-1392), which, together, make up the oldest and best-preserved collection of Buddhist scriptures in the world. 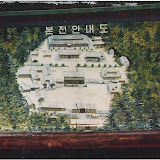