Its Afrikaner name is Oortjies which translates as "little ears"


Falkia repens is native to the winter-rainfall areas of the Eastern Cape of South Africa where it often found on damp or temporarily inundated soils.

A creeping mat-like perennial herb, Falkia repens is a reliable groundcover with leaves that are slightly succulent, enabling to withstand high temperatures through conserving water its leaves. Falkia is propagated from rooted runners; divide sections of the plant with its roots.

Hardy and evergreen in USDA Zone 9-10 and comes back from the roots in colder locations and can be grown down to USDA Zone 7.


Falkia repens  is attractive to bees and other insects.

The leaves of Falkia repens resemble those of Dichondria micrantha but the species are easily distinguished when flowering There are white flowers with light pink blush flowers from early Spring thru Summer! This falkia can tolerate heat, drought and poor soil, despite its delicate appearance.


Kusamono are traditionally potted arrangements of wild grasses and flowers in unique pots or trays. The name is composed of two Japanese characters-- “grass” and “thing”—which together suggest humble, everyday plants or even weeds, however the art of kusamono has developed beyond is humble origins. Today the term kusamono is used when the accent plants are exhibited as the focus. Kusamono can be tall, mixed plantings or all the same plant, in or out of a container. The kusamono determines the impression of place and season, such as a meadow, a bog, or the mountains. In the West, these displays are known as companion or accent plants

Shitakusa is exhibited with bonsai or similar displays. Outside of Japan you will commonly hear the term companion or accent plant, however complementary plant may be most appropriate as shitakusa is not meant to be the dominant focus of the presentation. Rather, it is intended to complete the exhibit of the main focus, which can be a bonsai, a suiseki, and/or a scroll

Jiita - "thin hardwood boards placed under suiseki (or bonsai) for display" A beautifully crafted Jiita will accentuate the heart and soul of a bonsai. 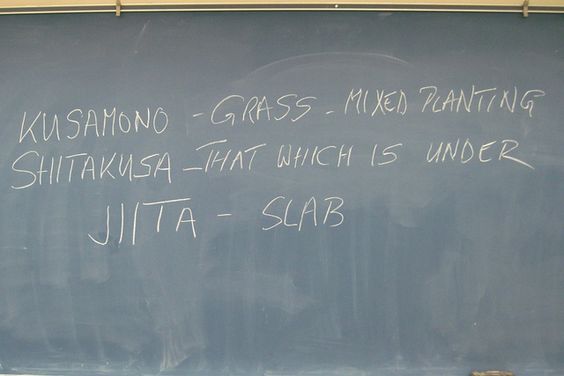 Kokedama, which in English translates literally "moss ball", is a ball of soil, covered with moss, on which an ornamental plant grows. The idea has its origins in Japan where this garden art is centuries old and is tied into the practice of bonsai, but it has grown into its own art form. Today Kokedama are displayed as the center of attention, typically affixed to a piece of driftwood or bark, suspended from a string, or nestled in a low attractive container.

Nearai is a form, not commonly seen outside of Japan. Nearai refers to a single plant or mixed plantings that have been grown in pots and when the pot is full of roots it is removed and displayed on a flat container. The purpose of this form is to showing the roots which can be washed to expose them for a more dramatic effect. Often Shitakusa, Kusamono or Kokedama can and will eventually develop into Nearai.