Bald Cypress Cones were opening today and seed falling out!


Seeds are produced annually and good seed production occurs about every 3 years. Seeds are dispersed more frequently by flood waters.  Under swamp conditions, the best seed germination generally takes place on a sphagnum moss or a wet-muck seedbed.  On better drained soils, Bald Cypress seed usually fail to germinate due to lack of surface water.  Soil saturated for 1 to 3 months after seed-fall is required for germination. Seedlings require light for good growth, thus control of competing vegetation is necessary.


Bald Cypress is a "deciduous conifer"- it has cones and sheds its needle-like foliage in the Autumn.

Other deciduous conifers are:


Bald cypress is a wetland species that grows along rivers, streams, and creeks as well as in swamps with slow moving water.  It is a legendary tree of the Deep South known for its "knees," moss-draped crown, and buttressed trunk. Taxodium distichum  can live up to 600 years old.  Taxodium distichum is native to the coastal plains along the Gulf of Mexico and the Atlantic Ocean and north up through the Mississippi River Valley. The heartwood of old growth bald cypress is very resistant to rot.  This is not true with younger second growth trees.

Cypress knees are woody projections sent above the normal water level function is unknown Lowland or swamp-grown cypresses found in flooded or flood-prone areas tend to be buttressed and "kneed," as opposed to cypresses grown on higher ground which may grow with very little taper. 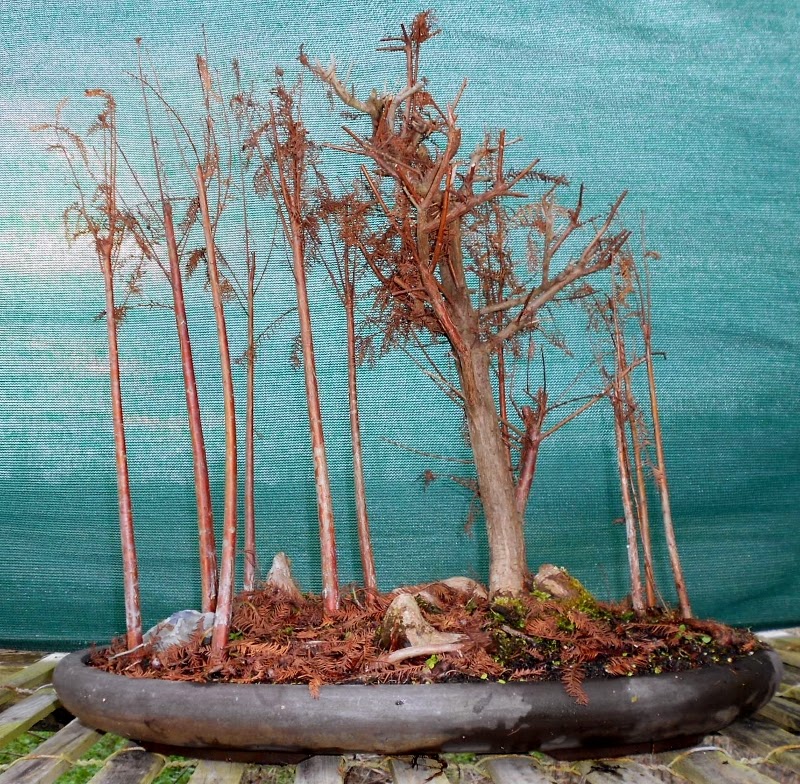 Bald Cypress tree is an excellent choice for someone who is just getting started with bonsai. Seeds and small trees are easily collected in this area, now is the time to find trees with cones and watch for them to turn brown so that the seed can be collected just before the cones open. The best digging time for cypress is from mid-­December to late February. Bald cypress bud back easily and will produce vigorous sprouts from the stumps. Taxodium distichum are frequently planted in groups in a single container, forming a Bonsai forest. Japanese term for growing a bonsai from seed is Misho.


Bald Cypress are not true cypress. True cypress are in the Cupressus family and are not native to the southeastern United States.